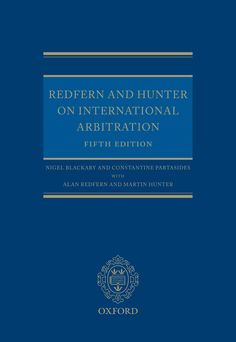 International arbitration has become the preferred method of resolving international commercial disputes around the world. There are today more users looking to the process to provide solutions to business disputes, and more lawyers counselling and arbitrating cases than ever before. This larger human constituency inevitably introduces complexities that did not exist before. Some of these complexities can and do introduce inefficiency — some to a depressing degree. However, such complexities should not be viewed as symptoms of decline, but rather as the companions of arbitration's emergence. This fifth edition deals with some of these new complexities. In addition to an entirely re-written introductory chapter, this edition features in Chapter 2 a more developed section on the modern limits of arbitrability of disputes. Chapter 3 features for the first time a section on the law applicable to issues of privilege and practitioner ethics in international arbitration, as well as to the growing procedural ‘soft law’ of international arbitration. Chapter 4 looks more deeply at the ever increasing use of arbitrator challenges and Chapter 5 addresses the heated debate on arbitral interim measures. Chapter 6 has also been re-written and includes a new — though proportionate — section on electronic document production in international arbitration. Chapter 7 adds a section on the important powers of US courts to order discovery in support of a foreign arbitration, and Chapter 8 on investment treaties, formerly Chapter 11, has been vastly updated to take into account the explosion of treaty arbitration case law and practice that there has been since the publication of the last edition in 2004. In Chapter 9, there is greater treatment of the increasingly significant issue of awards of interest in international arbitration. And in Chapters 10 and 11, there now appears far greater treatment of non-English and European authority on the critical issues of award annulment and enforcement.