Image credit: photograph of Aron Broches (1991) by his friend Judith Walser, reproduced here with her permission.

On today’s fiftieth anniversary of the coming into force of the Convention establishing the International Centre for Settlement of Investment Disputes (ICSID), it is right to remember the life of the main drafter of the Convention and founding Secretary-General of ICSID, Aron Broches. 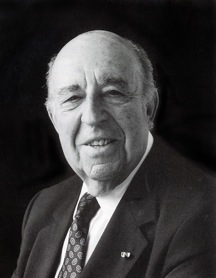 He was the oldest of three children: Ronnie, Julia, and Elias (‘Epie’). His mother and father, Anna Broches-Person and Abraham Broches, émigrés respectively from what is now the Ukraine and Belarus, met and married in Amsterdam. Abraham was a cigarette manufacturer of many successful Broches Cigarette brands.

From 1926 to 1933, my father attended the Vossiusgymnasium in Amsterdam. Among his classmates were the future journalist, historian and head of the Netherlands Institute for War Documentation, Louis (‘Loe’) de Jong, and the future playwright Willy Pos. After-school activities in the theatre and music led to a lifelong commitment to the arts. Ronnie was a pianist known for his playing of Chopin. His brother Epie became a semi-professional jazz pianist. My mother, Catherina (‘Kitty’) Pothast, was studying at the Royal Academy of Art in Amsterdam and my father at the University when they met on stage as students and amateur actors.

They married in 1939 and six weeks later sailed on the Nieuw Amsterdam for New York. Ronnie had enrolled in the law school at Fordham University to continue his studies in patent law. They were welcomed by his uncle and aunt into what I have come to understand was a community of extended family, friends, Dutch refugees, officials and professionals.

Their children, Alexandra and Paul, were born in 1942 and 1945 respectively.

In 1942, Ronnie completed his studies at Fordham University, adding a third law degree to the two he had already obtained from Amsterdam University. He then began a stint as Legal Adviser with the Netherlands Embassy and Economic Mission in Washington, D.C. and New York City. Through a form of rotation among junior officers, Ronnie had the good luck to be chosen Secretary of the Dutch delegation to the United Nations Monetary and Financial Conference. Held at the Mount Washington Hotel in Bretton Woods, New Hampshire in July 1944, the Conference led to the creation of the International Monetary Fund and World Bank. The head of the delegation quickly made Ronnie a de facto member of the delegation and assigned him to the drafting committee for the Articles of Agreement of the IMF. Ronnie was thus among the Bretton Woods Conference lawyers to whom Lord Maynard Keynes paid ‘particular tribute’ in proposing acceptance of the Final Act of the Conference.

Ronnie returned to Holland for the first time after the war in October 1945. His parents, brother and sister, her husband and their daughter, and extended family members did not survive the Holocaust. In the next few years he was able to rebuild the factory that had been closed, all the machinery stolen by the Nazis. The Broches brand continued to be produced until the business was sold and absorbed by a larger manufacturer in 1953.

Ronnie was back in the United States in March 1946, attending the Inaugural Meetings of the Boards of Governors of the IMF and World Bank in Savannah, Georgia, again as Secretary of the Dutch delegation. The Chief Legal Adviser of the U.S. delegation to the Bretton Woods Conference took responsibility for trying to put some lawyers on the staff of the Bank once it opened for business in June 1946. He particularly asked for Ronnie. With the blessing of the head of the Dutch delegation at the Savannah Meetings, Ronnie joined the Legal Department of the Bank in September 1946.

Ronnie’s arrival brought to five the number of lawyers in the Legal Department. He became Assistant General Counsel of the Bank in 1951, Director of the Legal Department and Associate General Counsel five years later and General Counsel in 1959. By then, the number of Legal Department lawyers had increased threefold. During these years, Ronnie and his colleagues developed the legal foundations for the operations of the Bank, pioneering approaches to such important issues as the governing law of Bank loan agreements. They were prominently involved in building a World Bank ‘group,’ working on the Articles of Agreement of its first affiliates, the International Finance Corporation and the International Development Association. In the midst of all this, Ronnie was prevailed upon to accept the non-legal post of heading the Bank’s 1953 general survey mission to Nigeria, which resulted in a report providing the basis for the then colony’s last pre-independence five-year development program.

Just a year after the establishment of the International Development Association in 1960, Ronnie and the then President of the World Bank broached with the Bank’s Executive Directors the idea of setting up a further affiliated institution, the center that became ICSID. By providing an international forum for the conciliation and arbitration of investment disputes, it could help to promote the flow of private foreign investment, ‘an objective of special concern to the Bank.’ Ronnie elaborated on the idea in an initial draft of the ICSID Convention that was favorably received by the Executive Directors. There followed successive drafts of the Convention that Ronnie skillfully negotiated with member governments. A final text was approved by the Executive Directors in March 1965 and opened by them for signature and ratification of member governments. The twentieth ratification was received—perhaps not coincidentally—from the Netherlands, on September 14, 1966. In accordance with its terms, the ICSID Convention came into force one month later. Early in 1967, the Administrative Council of ICSID held its Inaugural Meeting and elected Ronnie Secretary-General of the Centre, authorizing him to combine that function with continued service as General Counsel of the Bank. Ronnie remained Secretary-General of ICSID for the next 13 years. In that period, he oversaw the preparation of the ICSID Regulations and Rules and Model Clauses, registered the first ICSID cases, launched the Centre’s investment law publishing activities and introduced the ICSID Additional Facility (being made, in the meantime, Vice President as well as General Counsel of the Bank).

When Ronnie first came to the Bank in 1946, his plan was to work there for no more than five years. Fortunately for the Bank and ICSID, he instead stayed, as he put it, 'until the end.' He retired from his World Bank position in 1979 and from his ICSID service the following year. On his retirement from the Bank, Ronnie was decorated by the Dutch government Commander in the Order of Orange-Nassau.

In 1982, Kitty died in a burglary of their Washington home. Despite that tragedy, Ronnie continued his professional activities. As an observer representing the International Council for Commercial Arbitration, Ronnie participated in the working group and plenary sessions of UNCITRAL on its Model Law on International Commercial Arbitration. He worked as a consultant for the UN Centre on Transnational Corporations. He took justifiable pride in also serving as the presiding arbitrator in two ICSID cases and as the member of an annulment committee in a third case. Ronnie’s writings included his magnificent lectures at the Hague Academy of International Law on the World Bank and ICSID, a lively commentary on the UNCITRAL Model Law and incisive articles on the finality and enforcement of ICSID arbitral awards. Most of these were republished in an invaluable collection of Ronnie’s Selected Essays, which appeared two years before he passed away in 1997.