Evidence in Investor-State Arbitration – A Restatement

Public discourse today suffers from an acute onset of “alternative facts.” In the U.S., a satirist recently poked fun that the trademark make-up of the White House spokesperson – smoky eyes – were made from ashes of “burnt facts.” Smokescreens, make up, and creative invocation of facts are by no means limited to the U.S. One need just read the dueling Russian and Western pronouncements regarding the poisoning of Sergei Skripal and Yulia Skripal to infer that one account at least must rely upon evidence that has, charitably, a tenuous relationship to reality. This development is certainly not new to international affairs. One need only refer to the excellent work of Christopher Clark in The Sleepwalkers to find examples of misinformation and forged documents poisoning the relationship between Austria-Hungary in Serbia in the run up to World War I to find historical precedent. Yet, as Christopher Clark so poignantly observes, the failure to understand and act upon facts rather than narratives would prove to have disastrous consequences for the Europe and the World in July 1914.

Investor-state arbitration frequently serves as one of the arenas in which geopolitical gambits are made and lost. This is certainly true of the high-profile confrontations between the shareholders in Yukos Oil Company and the Russian government, the nationalization of the oil sector by Venezuela at issue in the Mobil and Conoco arbitrations, and the multiple proceedings between Chevron and Ecuador regarding litigation arising out of rainforest pollution claims. It remains true even for the apparently “smaller” disputes with investors of lesser pedigree and projects further removed from public notice. If a point of investor-state arbitration is to de-politicize or defuse diplomatic engagements between states regarding the ownership rights of their nationals abroad, this by its very nature introduces political narratives into the arbitral process itself.

It is therefore not the least surprising that international investment arbitration has been a theater to “guerrilla tactics.” Whether these tactics rely upon the assertion of wholly unsubstantiated factual claims, a support of factual submissions with dubiously sourced news stories, or the accusation of opposing counsel of dealing in dangerous and prejudiced conspiracy theories, they attempt to blur the lines between fact and “alternative fact”, reality and narrative. One such narrative, frequently employed by states, casts the investor as having obtained the investment by corrupt means. Another narrative, frequently employed by investors, is that members of government acted with invidious intent in their decision-making referring the tribunal to an anonymous source close to the highest levels of government. Investor-state arbitration, too, is thus fertile ground for “burnt facts,” alternative narratives and innuendo.

The danger for investor-state arbitration is that some politicians and advocates alike now paint the picture that arbitrators respond to ideologically well-sounding narratives rather than facts. In such a viewpoint, arbitrators want to believe one version of the truth and thus are alleged to credit narrative over evidence. It is on the basis of such claims that investor-state arbitration in its terms has become part of a narrative of a globalist cabal employing ISDS as “pseudo-courts” allegedly deployed to undermine the legitimate exercise of police powers by the state.

On its face, it is hard to credit this charge of bias. Susan Franck’s pioneering work has shown that ISDS decisions are not inevitable, that no one side wins disproportionately, and that reports of arbitrator prejudice are greatly exaggerated. Still, if guerrilla tactics did not work, why do we use them? Is investor-state arbitration equipped to combat and debunk them and separate fact from fiction, narrative from reality?

To answer this question in the affirmative requires a systematic engagement with how tribunals admit, appraise, and address evidence as part of their decision-making process. If one can arrive at the conclusion that tribunals predictably and reliably follow principles of evidence – and that counsel can plead their cases in keeping with these principles to debunk unsupported narrative – the threat from proverbial decision by “truthiness” in international arbitration would be greatly reduced. We as a practice could explain why decisions are based in record fact rather than supposed arbitrator prejudgment. 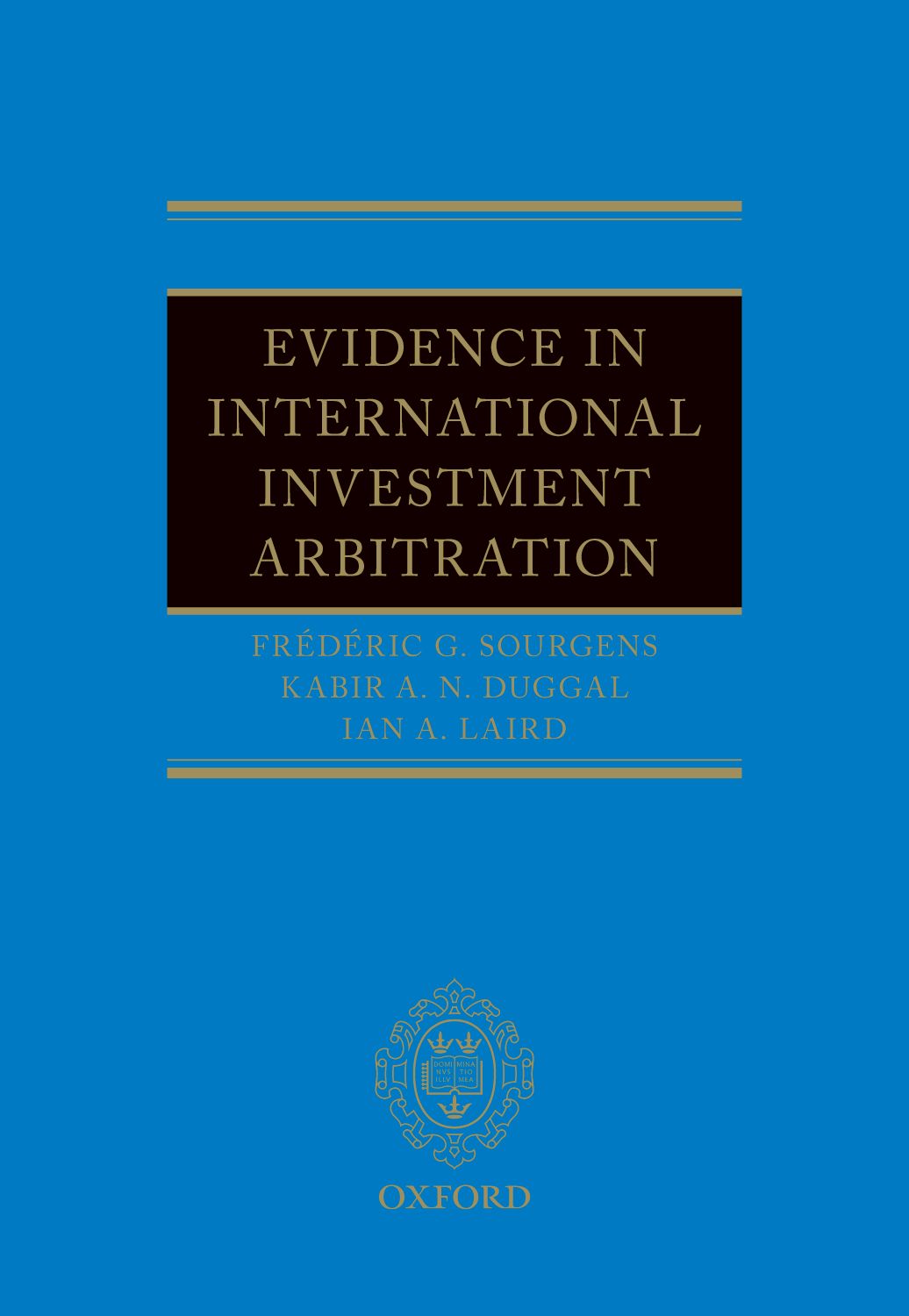 In our book, Evidence in International Investment Arbitration we systemically engaged the decisions of investor-state tribunals (jurisdictional decisions, award, procedural orders etc.) to see if any coherence could be brought to the fray. Our starting point was that discretion of the arbitrator – the free examination of evidence by the tribunal – would not suffice. Discretion does not per se banish ideological predispositions from deliberations. Discretion could well prefer “fake news” to hard fact in arbitral decision-making.

What we have found is that it was possible to articulate close to 100 evidentiary principles that guide factual decision-making by arbitral tribunals. These principles are consistently applied by arbitral tribunals even if they do not always identify them as such. Our inquiry began with the rules governing burdens and standards of proof. Both burdens and standards are the structural basis upon which decision-making in most any form of dispute resolution, including ISDS, can proceed. These burdens and standards of proof in investor-state arbitration will look familiar to any international dispute resolution practitioner: either party asserting a fact in order to establish an element of claim, counter-claim or affirmative defense of propriety of a remedy must present evidence to support it; It can do so by direct or circumstantial evidence, or proof of propriety of an inference or presumption. (§1) The more sensational the claim, the more gravity it has for the dispute, the more searching the tribunal’s analysis is likely to be. (§4)

Our analysis then led us to the related question of decision by the drawing of an inference. We again begin with a working definition: “an inference is a conclusion made in the absence of sufficient direct or indirect probative evidence that as a matter of plausibility, a fact nevertheless must have occurred or circumstance must be the case in light of other relevant record evidence and party conduct in the arbitral proceedings.” (§26(2)). Our work sought to outline the factors relevant to the drawing of inferences from the arbitral jurisprudence and identified five record factors (§28) and five factors relying upon misconduct of the parties to an arbitral proceeding (§29).

This led us then to the heart of the debate about evidentiary rules in international arbitration – once we have established how tribunals make decisions, are there exclusionary rules of evidence on the basis of which a tribunal would decide not to admit certain evidence into the record even though it would otherwise be important to its fact finding mission? The jurisprudence again supported a rich understanding of such exclusionary rules beginning with some five reasonably well-defined privileges and setting out how such a privilege would have to be proved and by whom (§§33-40), as well as how such a privilege might be lost (§41). It further outlined how tribunals outlined exclusionary rules beyond the privilege context proper by looking to confidentiality (§§42-47), exclusion premised upon the protection of the right to be heard (§48), protection of the integrity of the proceedings (§49), protection of the equality of arms (§50) and exclusion on grounds of international public policy (§51). With this foundation in place, our treatment continued to address the role of documents and witnesses in investor-state proceedings. We again were able to provide a reasonably fine-grained analysis of tribunal practice amenable to restatement in the form of principles in the remaining 40 or so sections of our restatement effort.

In short, our examination of the jurisprudence confirms that investor-state arbitration follows robust rules of evidence. It can withstand the charge that as a practice, it cannot distinguish between truth and truthiness. The book thus provides additional evidence for the integrity and earnest judgment of arbitrators in the field.

[For an earlier discussion of the same topic from which some of this post has been developed, see http://arbitrationblog.kluwerarbitration.com/2017/03/16/evidence-in-investor-state-arbitration-the-need-for-action/]

Evidence in International Arbitration by Freddy Sourgens, Kabir Duggal, and Ian Laird is available now from the OUP Catalogue. Appendix 1 is available for preview here.